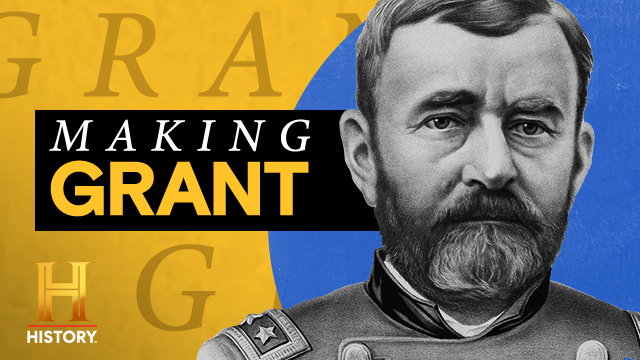 Emmy-winning actor and Broadway legend André de Shields narrates Making..., an original podcast from The HISTORY® Channel. Each season takes listeners inside the lives of history’s greatest figures and examines the events that forged these legends. Season two, Making Grant, unpacks one of the most divisive figures in U.S. history, examining how Ulysses S. Grant went from Civil War hero and abolitionist president to bloody butcher and corrupt drunk in the eyes of the American public. Each episode will bring together leading historians, authors, and journalists to paint in vivid detail the forces that shaped the nation’s 18th president.

Grant’s final victory brings Lee’s army to defeat and the Civil War to a close at last. But when President Lincoln is assassinated, Grant is charged not only with ending the war but with keeping the peace.

A surprise attack at the Battle of Shiloh galvanizes Grant’s combat instincts. His grit and dogged determination leads President Lincoln to appoint Grant general of the entire Union Army.

No one expected Ulysses S. Grant to grow up to be the Union general who would end the Civil War and eventually win the presidency. A string of early failures trains Grant to become one of America’s greatest and most unlikely heroes.

With the end of the war in sight, Lincoln grows frustrated as the Union army stalls, and his promises of emancipation struggle to take root even within his own army When the Union finally does break the Confederacy and emerges victorious, Lincoln’s triumph - and his very life - is cut tragically short. But his legacy lives on.

Lincoln finally passes the Emancipation Proclamation, declaring the end of slavery and establishing the United States Colored Troops. Meanwhile, Confederate forces gain momentum under their new general, Robert E. Lee. Hope for the end of the war hangs on a victory at Gettysburg.

Episode 3: Lincoln: The Commander in Chief

Lincoln takes office as the southern states domino into secession. By spring of 1861, the country is at war, and eleven states have left the Union. As Lincoln learns to be both president and commander-in-chief, emancipation becomes the most pressing question. Lincoln must convince the nation that the Civil War should be about more than simply preserving the Union.

After leaving government, Lincoln is settling into his life as a successful lawyer with a young family. Earlier setbacks have left him feeling like he’s done with politics, but politics are not done with him. When new domestic policy jeopardizes the momentum of abolition, Lincoln decides he can no longer sit on the sidelines. His fight against slavery takes him to the national stage and then to Washington, as the newly elected president of a fractured country.

Episode 1: Lincoln: The Boy From Indiana

Growing up poor on his father’s farm in the frontier wilderness of Indiana, Abraham Lincoln seems to be the least likely man to lead the country. But Lincoln’s love for learning and desire to leave a mark on the world take him from a hardscrabble farm life to winning his first election.

Introducing Making Lincoln, a new podcast from The HISTORY® Channel. Hosted by Emmy-winning actor and Broadway legend André De Shields, each episode takes you inside the life of our 16th President, bringing together leading historians, authors and journalists to uncover the forces that made the man Lincoln would become.

Apple Podcasts | Spotify | Stitcher
By submitting your information, you agree to receive emails from HISTORY and A+E Networks. You can opt out at any time. You must be 16 years or older and a resident of the United States. More details: