Listen to all of  History This Week 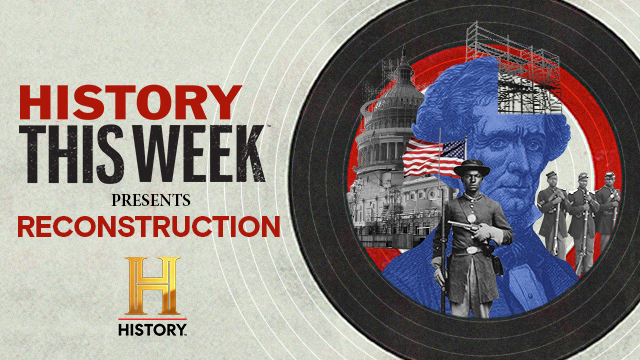 On “Reconstruction,” HISTORY This Week takes listeners from the Civil War to Civil Rights to uncover the true cost of putting the country back together.

May 26, 1965. One hundred years after the Civil War, Congress is debating a bill whose goal is to enforce the 15th amendment, which, in 1870, promised the right to vote regardless of race. But that’s not what happened. Now the Civil Rights movement is saying: It’s time to make real the promises of the Constitution for all Americans. The forces that undermined the First Reconstruction, and gutted the 15th Amendment, are resisting those demands. In the middle stands Lyndon B. Johnson, a Southern Senator with a record of opposing civil rights. Robert Caro, acclaimed journalist and Johnson biographer, tells us, what will change Johnson’s mind and turn him into a champion of the Voting Rights Act? And how will he manage the impossible task of getting it passed when so many Southern Senators are hellbent against it?

In 1935, famed Black sociologist and scholar W.E.B. Du Bois published Black Reconstruction, a revolutionary reassessment of the period of Reconstruction after the Civil War. The book was also a critique of the flawed way others had been telling the story—including leading scholars of the day. Sally Helm sits down with professors Eric Foner and Henry Louis Gates Jr. to discuss Du Bois’ insights. They hone in on his argument that a biased portrayal of Reconstruction was used for over a century to justify the oppression of Black Americans.

May 16, 1868. The Capitol is filled with spectators, anxiously trying to predict how each Senator will vote. It’s the first presidential impeachment trial in American history, and its outcome will have profound effects on Reconstruction, the great project of rebuilding the nation after the Civil War. What made many members of Congress declare President Andrew Johnson unfit to lead that effort? And what motivated this former ally of Abraham Lincoln to declare himself an enemy of true Reconstruction?

Reconstruction I: Secession on Trial

May 10, 1865. Jefferson Davis is awakened by gunshots. The president of the defeated and disbanded Confederate States of America is on the run, and today, federal troops finally catch him. His arrest puts the face of the Confederacy behind bars. But it also creates a problem for federal officials: what exactly do we do with this guy? How will they hold Davis accountable for his acts without turning him into a martyr for his cause? And then there’s the larger question: how can they piece a shattered nation back together?

Listen to the Trailer

In this miniseries, HISTORY This Week takes listeners from the Civil War to Civil Rights to uncover the true cost of putting the country back together. Premiering May 9.

The “Reconstruction” miniseries was reported and produced by Julia Press. It was story edited by Mary Knauf and Jim O’Grady, and sound designed by Brian Flood, Bill Moss, and Dan Rosato. Ben Dickstein is our senior producer. HISTORY This Week is also produced by Morgan Givens, Julie Magruder and Sally Helm. Our associate producer is Emma Fredericks. Our supervising producer is McCamey Lynn and our executive producer is Jessie Katz.

Listen to all of  History This Week
By submitting your information, you agree to receive emails from HISTORY and A+E Networks. You can opt out at any time. You must be 16 years or older and a resident of the United States. More details: