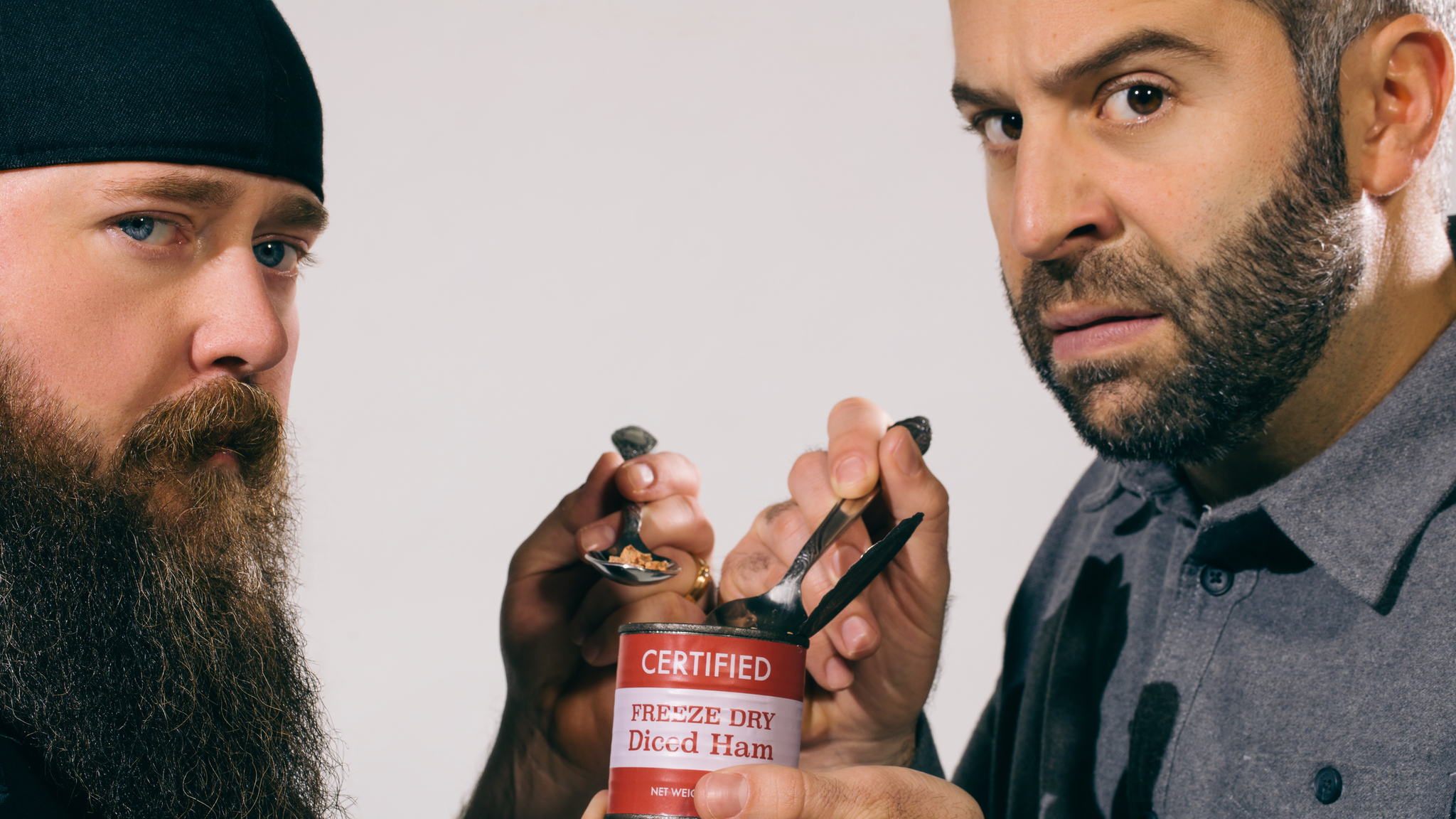 Collectors everywhere save decades-old bottles, tins and boxes that once contained the world's most famous snacks and meals, but not many preserve the actual expired food within the packaging. And of those collectors, few would dare consume their antique meats or old soups. But on "Eating History," the new HISTORY series premiering on Wednesday, March 25 at 10/9c, hosts Josh and "Old Smokey" do just that, tasting these foods and unlocking forgotten nostalgia and unbelievable true stories about the lives and times of the nation's past.

HISTORY.com spoke to Josh and "Old Smokey" about their experiences making the series, how they got into edible artifacts, and much more.

HISTORY: Old Smokey, where did you get your name?

What inspired you guys to taste expired food?

Josh: I come from a long family of collectors. My dad collects hats and toy soldiers, and old liquor decanters. My uncle Dan was like the main collector in the family. He collected coins, car banks and a lot of old soda or liquor bottles.

I was never the dude who looked at an expiration date and was like, 'I should definitely pay attention to that.' It's always been an experiment. My parents will tell you that I was always a crazy risk-taker, and that I rarely listened when somebody told me no. Obviously there's an inherent risk and danger in eating old food. It's not like I just pick up something and I eat it. I take my time and look at all the risks, especially when it comes to canned meats. Botulism is the real deal. But in my family, they would always say, 'Oh, don't worry. Josh will eat it.'

My grandpa was a World War II veteran. I spent a lot of time with him when I was younger and I thought I could make a connection with him and, maybe someday, actually eat the exact same food that he ate.

He was a badass. Just recently, we dug up his discharge papers and some other paperwork from when he was in the military. He was actually a dog trainer—he used canines in combat. He was also shot while in combat. I never would have dreamed—because he didn't talk about that—that he was a dog trainer. I love animals, I love dogs, so learning that was pretty cool. I just about got all emotional here talking about it. I'm still a little bit shook.

What's the weirdest historic food that you've ever eaten?

OS: One of the weirdest was the 100-year-old cod liver oil. Just the thought kind of freaked me out, because it's cod liver oil. I mean, come on! And it was also liquid form, not capsule form. I've eaten bugs and stuff like that, but that's not historic. Also a moose nose. That was pretty strange.

Josh: It would definitely have to be that jellied moose nose we had on the show. But I've also tried everything from eyeballs to tongue. We've eaten some bugs on the show. Bugs are weird. They're going to weird people out for sure. But the adventure is trying everything, right? I was never a picky eater as a kid.

What is the worst food you've ever tasted?

OS: This is one of those things that might honestly surprise people, because I went into it thinking it was going to be good. I thought it was going to be one of the cooler things that I would get to eat because it was something from before I was a kid: It was a 1979 corn chip, of all things. Honestly, it was like trying to eat a bunch of crushed up medicine or something. It's one of the worst things I've ever put in my mouth.

Josh: I'm sure Smokey probably told you the same thing, but it's the 1979 corn chip that really took us out at the knees. The 1985 wine cooler was not very good. Every day is an adventure on this show.

What would you say was the best, or most surprising, food you ate?

Josh: My favorite snack of all time is potato chips. I have an unhealthy obsession with them. We opened a can we thought was from 1979; it was perfectly sealed and the chips had held up perfectly. They were still the same shape as they are today. They had a little bit of age to them, but for the most part, they were a beautiful can of chips.

OS: That brings us back to the cod liver oil. I had a total fear of that going in, but it turned out to be pretty awesome. It was really surprisingly good!

OS: The 5,000-year-old honey that was dug up in Georgia. It's the oldest thing I could possibly eat. I would love to be the person who eats the oldest food in the world. The environment was so different 5,000 years ago. The bees that made this honey could have been so different. I would love to know if it would taste pretty much like honey does today, or if there is something unique about it.

Josh: My family was in Italy five or six years ago, and we went down into these old cellars, near Lake Como. During World War II, people helped persecuted Jews hide in those cellars. It was so cool down there—like 45 degrees—and they put all of their most precious wine from that era down there. When the war ended, and they were able to save everybody, they just kept the wine down there. And so there are wines down there from the 1940s that I would love to try, because I know that they've been kept in a cool dry place forever.

Also, every time they find an old shipwreck, it seems like they find some sort of old liquor or wine, or booze. I love vintage alcohols, which are usually relatively safe.

What was your favorite part about being on the show?

Josh: It's been a lot of fun getting to work with old Smokey. I sent him some food and he sent me some rations. We were able to teach each other. And then when you go into a job like this and every day is risky and crazy, you form a certain bond with everybody in the studio. We make each other laugh every single day on the show, while still dealing with some pretty serious subject matter.

OS: The people that I've met are fricking amazing. I love the people. They became an extended family and I really enjoyed spending time with them. Also, just getting to go through all these different weird foods and traveling around to meet great people.

What would you say to people who argue that this show is being done for shock value?

OS: Watch the show. There's so much history behind everything we encounter. It doesn't matter if it's corn chips or Civil War hardtack (a hard cracker). Each one of these products has just been instilled in American history. They've affected our day-to-day life. These items changed America.

Josh: It's definitely not [just for shock value.] There's an awesome learning curve. You have things on your shelves and you wonder... 'What is this item?' Canned soup has always been around, right? Chips have just always been around. We don't know a ton of the history behind these items. Telling the story of everyday food helps us to find commonality, and then we can build a bond from there.