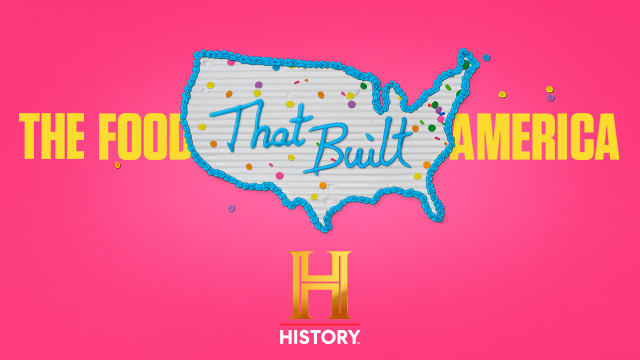 The Food That Built America Podcast

It takes bold visionaries risking everything to create some of the most recognizable brands on the planet. The Food That Built America, based on the hit documentary series from The HISTORY® Channel, tells the extraordinary true stories of industry titans like Henry Heinz, Milton Hershey, the Kellogg brothers and Ray Kroc, who revolutionized the food industry and transformed American life and culture in the process.

In the mid-50s, a San Bernardino man named Glen Bell is fixated on McDonald’s. His own burger stand is in shambles, and he’s trying to bounce back. When he looks around, though, he realizes Mexican food is gaining popularity, but that most Americans are afraid of anything that strays from their bland palettes. That’s when he realizes: A taco is really a burger in a shell. With a few fits and starts, Taco Bell is born.

Popcorn may very well be the oldest snack food on the planet, but for much of its modern history it was something to be consumed in movie theaters or at fairgrounds - not at home. No truly national brand existed and it was far from the convenient snack it is today. But in the 1950s, Orville Redenbacher believed science could launch popcorn forward, making him a household name. His thousands of hybridizing experiments innovated popcorn down to its genetic code, resulting in a more flavorful pop twice the size of anything the world had seen before.

Nowadays, grocery stores and gas stations are filled with Little Debbie products. In the 1950s, though, snack cakes were just gaining popularity, when a Chattanooga couple took a risk, scrapping big pies in favor of debut snack cakes instead. their company, Little Debbie, now dominates 54% of the snack cake industry with over $890 million in sales.

In the mid 1970s, a woman who wants to be more than just a housewife, is tired of living in her husband’s shadow. Armed with her phenomenal cookies, Debbi Fields seeks out an unlikely spot for her unlikely business - a cookie shop named Mrs. Fields in a shopping mall...run by a woman with no experience. With her husband’s credit on the line, she starts her journey to build a $450 million dollar cookie juggernaut.

In the mid-60s, a single perfume salesman finds himself struggling to meet women to date. So, he goes to the bar to complain to the bartender about his predicament. That’s when the bartender has an idea: What if you made your own co-ed bar? What ensues is a quest to make bars coed and fun, and TGI Fridays is born, revolutionizing the idea of sit-down dining and bar culture. Now, the business has 303 locations in the United States.

In Illinois, a father and son working in the wholesale ice cream mixing business have an idea. Convinced that ice cream tastes better fresh before it’s fully-frozen, what if they could create a machine that could dispense it while it’s still only semi-solid? Their names are John and Alex McCullough. By 1940 the McCullough’s open their first store, naming it Dairy Queen.

Post-World War Two, a food entrepreneur sees promise in a new business. In 1948, William Rosenberg notices two of his offerings selling better than anything else: donuts and coffee. So, he takes a risk, opening a shop with his brother-in-law that will sell just two items. The store, Open Kettle, offers a whopping 52 kinds of hand cut donuts. After a few bumps along the road, Dunkin Donuts is born, and Rosenberg finds a way to dominate the donut business.

150 years ago, German immigrants in the Midwest write the history of beer in America. A recently shipwrecked steamboat captain - Captain Frederick Pabst - buys a local brewery, becoming the largest producer in the city. The crisp American lager we know today is born.

Sixty years ago, sandwiches were finger food, not a whole meal, and certainly not sold as fast food. But when three high school friends encounter a sub sandwich, they realize it’s the perfect fast-food alternative. As they navigate advertising, business, and menus, they create Blimpie, and reshape the way Americans think about lunch.

In the 1950s, one of the biggest companies in the world - Procter and Gamble - decides to enter the chip business. A chemist for P&G designs a strong, saddle-shaped chip and a revolutionary container to ship them in, and Pringles are born.

Nabisco, the most popular cookie company, is born when an ill-fated partnership leads Adolphus Green to revolutionize packaging and create one of the most iconic cookie and cracker companies ever. But when his former partners strike back with their own invention, Green retaliates with the help of milk chocolate titan Milton Hershey.

A Game of Chicken

In the 1970's, Ray Kroc of McDonald’s is far ahead of the competition. But when a burger chain called Burger King poaches his third-highest ranking executive, Don Smith, it's war. Smith re-engineers the emerging rival, and in an unprecedented move, Kroc brings on a world renowned chef to develop the chicken nugget.

William Wrigley, whose name will later adorn sports stadiums and buildings, first stumbles upon a new product that will kickstart a revolution across industries.

At the turn of the 20th century, James Kraft challenges thousands of years of cheese-making tradition and forever alters the dairy industry with his new cheese innovation: processed cheese.

In the 1950s, two Florida visionaries start Insta-Burger King, a burger stand that will become Ray Kroc and McDonald’s biggest rival, re-inventing their kitchen's equipment into the pioneering flame broiler. Over the next two decades, these two iconic restaurants will duke it out, launching the flame-broiled burger that will shape the world.

During the Great Depression, a Kentucky businessman named Harlan Sanders started selling fried chicken out of the tiny kitchen inside his gas station. He launched a product that would become an American staple and make him a brand icon: Kentucky Fried Chicken.

With his iconic milk chocolate bar, Milton Hershey transformed an exotic luxury into an affordable indulgence for millions of Americans. Then he went to war with an upstart rival - Frank Mars, creator of legendary bars like the Milky Way, Snickers and Three Musketeers.

The Chips That Took Over the Snack World

While entrepreneur C.E. Doolin was getting his car serviced at a gas station in San Antonio, Texas, he came across a treat that locals called Fritos ("little fried things"). He turned it into one of the top-selling snack foods in America.

In 1905, an 11-year-old boy named Frank Epperson left a stirring stick in a cup of soda out in the cold overnight. The next morning, he discovered the Popsicle, an icy treat enjoyed by millions today.

The 57 Varieties of Henry Heinz

After suffering through bankruptcy and imprisonment in his early 20s, a young entrepreneur named Henry Heinz made his own version of a popular sauce known as ketchup. His tasty brand would change Americans’ food preferences for generations.

For the Love of Pizza

The story of two enterprising brothers from Wichita, Kansas, Dan and Frank Carney, whose iconic franchise Pizza Hut helped turn a little-known Italian dish into the single most popular food in the world.

Dick and Mac McDonald created a ground-breaking innovative restaurant in San Bernardino, California. But it took an ambitious salesman named Ray Kroc to turn McDonald’s into a fast food empire.

As Corn Flakes take over the world, brothers Will and John Harvey Kellogg do battle with a former patient-turned-rival, C.W. Post. Eventually they go to war with each other. Part two of a two-part series.

Cereal Part One: The Brothers of Battle Creek‬

The first part of a two-part exploration of the two great American breakfast cereal dynasties, Kellogg’s and Post, and the eccentric sanitarium where they began.

America’s Home Brew: The Addict and the Promoter Who Built Coca-Col‪a‬

The story of Coca-Cola is the tale of a chemical genius and morphine addict, John Pemberton, and a brilliant pharmacist-turned-promoter, Asa Candler, who transformed an obscure soda tonic into one of the most recognizable brands on the planet.