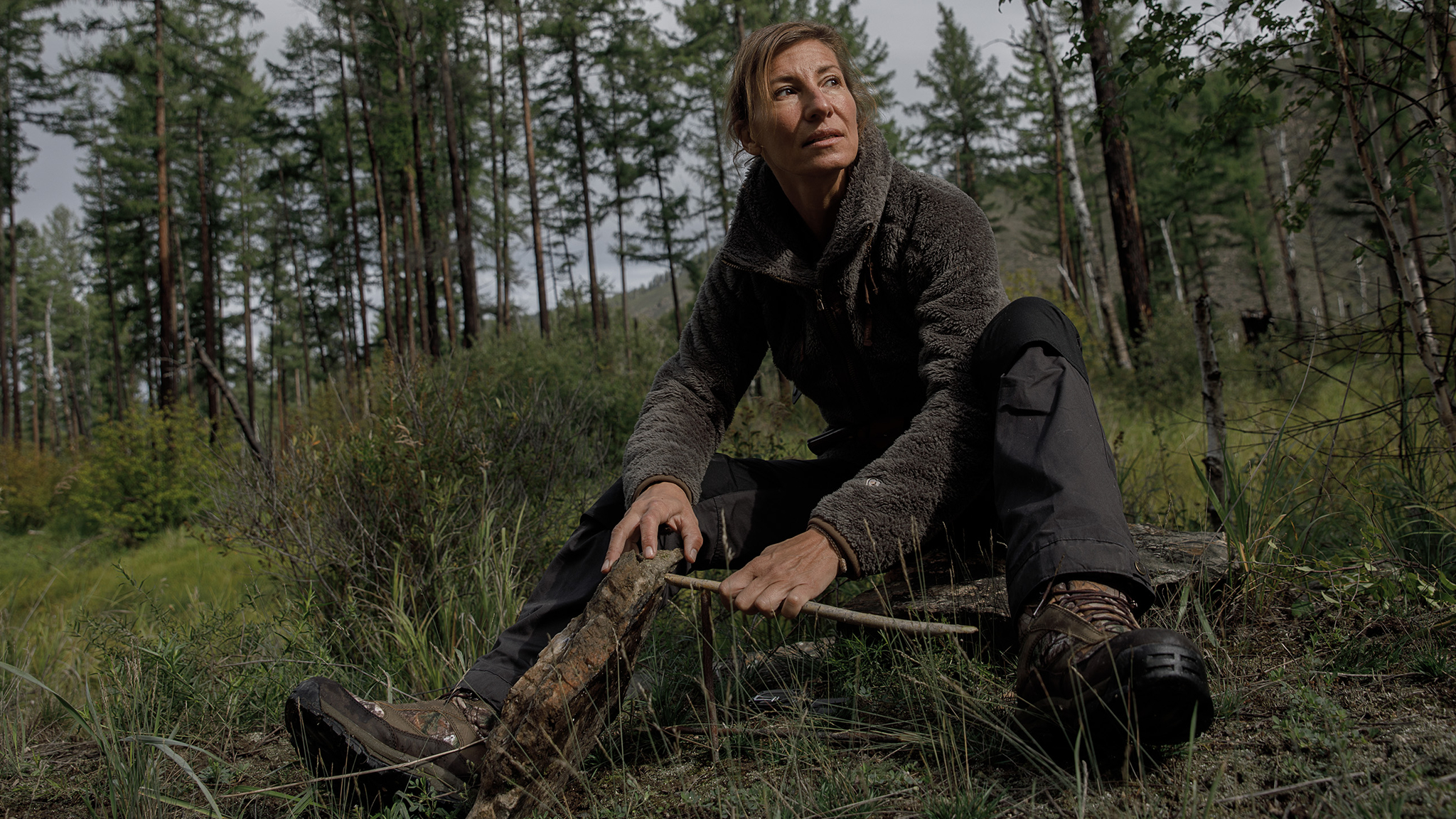 The Women of 'Alone'Discuss Surviving in the Wild

Throughout the last seven seasons of the hit HISTORY® Channel series, ‘Alone,’ we’ve witnessed many incredible feats of survival. We asked three of the toughest women to ever appear on the show about their experiences—both the good and the bad: You’ll hear from Nicole Apelian, who appeared in Seasons 2 and 5 and lasted a combined 66 days in the wilderness; Woniya Thibeault, who endured 73 days during Season 6; and Kielyn Marrone, who made it 80 days during Season 7.

Check out their answers below.

WATCH: every episode of Alone from the beginning.

Do you think being a woman gave you advantages the men didn’t have?

Woniya Thibeault: Women typically have lower metabolisms, which is a huge advantage in survival situations. Being smaller bodied is also an advantage; it requires less food and water, less material to clothe and shelter oneself, etc. Women are naturally more predisposed to multitask, which is important out there. Women are also often predisposed to be nurturing—and nurturing oneself rather than pushing stoically through hardship—which is something that has huge benefits in longer-term survival and wilderness living situations. Many women tend to be more intuitive than men, or at any rate, this is often more nurtured in us. This can be a big advantage in all kinds of decision making, helpful for understanding patterns in the plant and animal world, which makes a big difference for hunting and gathering and finding other important resources.

Women are naturally very resilient—physically, mentally and emotionally, because we have had to be in a world where a lot of the burdens and less of the advantages come to us.

Nicole Apelian: I think, as a vast generalization, many women are better at dealing with emotions due to how we’re raised. When you’re alone for that amount of time, all of your possible demons or things you haven’t dealt with will creep up. I think that my mental state was a distinct advantage.

READ MORE: ‘Alone’: The Winners from Every Season

Woniya Thibeault made it 73 days during Season 6.

What preconceptions/misconceptions/myths have held you back as a woman in the ‘survival’ field?

Apelian: The survival field is predominantly men. I’ve needed to prove my skills to show I am equipped in this field versus simply being accepted as having them.

Thibeault: I see the fact that young girls are often raised to be less physical, less outdoorsy, less oriented towards hunting, fishing, construction, etc. to be the major limiting factor, not our inherent interest in and capabilities in these fields. Women have to work harder to be taken seriously, have to prove themselves to be trusted as being capable. This is frustrating and limiting.

Being sexualized is also a very frustrating thing as a woman in the survival field. [It’s] another element of not being taken seriously and sometimes not being as safe in places or groups as men would be.

For those who had children at home, what was the experience like being away from them?

Apelian: This was really tough for many reasons. My kids are my #1 priority, so before I leave for any sort of adventure we sit down and have a discussion and we all weigh in. It’s tough for them to be without their mama for that long, and equally tough knowing that you’re needed at home.

What is the toilet/bathing situation?

Apelian: I would dig a hole for #2–I tried to poop in the same general area so that I wouldn’t forage or walk there. I peed around my camp in a circle when I had to go. As far as bathing went, I would try to keep my hands, face, feet and ‘bits’ clean. I only did a full bath twice–both times using water I heated up on the fire. I learned how to do a bucket bath with very limited water when I was in the Peace Corps in Africa. You can get pretty clean with a small amount of water!

How do the women of ‘Alone’ handle having their period on the show? Are you allowed to bring pads/tampons with you?

Apelian: We’re allowed to bring whatever we use for our menstrual cycles at home with us, as long as we don’t repurpose it. Many people postulated that I didn’t get my period on Season 2 due to weight [loss]. But in fact, I started with my period, got another around Day 21 and again around Day 50, so I had my period almost half of my time out there, and it was an extra heavy flow. I burned anything with blood on it, and the bears didn’t bother me at all. A lot of people ask this question, or worry about blood and the bears. I think it’s notable that the women are also dealing with their periods when out there on top of everything else!

Thibeault: I brought organic cotton reusable cloth pads to use. While out there, I realized that keeping them clean was going to be an issue, so I used disposable pads provided by the show instead.

Kielyn Marrone: I got two cycles out there before I got too skinny, or put my body through too much stress, to get it. Besides using the pads provided, I used moss and lichen [a plant] to wipe and used water to keep clean. I normally get very bad cramps and the survival experience made them just as bad, or worse.

READ MORE: Season 8 Participant Gear List: See what the new contestants brought with them to help them survive!

Did you get physically stronger? How so?

Marrone: I felt physically very strong—until the last couple weeks. I did feel very mentally tough the whole time, though. Despite looking like an emotional mess sometimes, I really felt incredibly strong-willed.

Apelian: After a month, the lack of calories started to catch up with me, and my body started to deteriorate. In the end, I came out weaker than when I went in.

What skills did you discover that you never realized you had?

Apelian: I realized I can rise to any challenge. I also realized that I had dealt with my grief and personal issues. (We all have them!) I came through the experience with peace and joy in my heart—being alone can be very challenging mentally, and knowing that I could be solo in a peaceful way meant a lot to me.

Thibeault: I never knew I was someone who was able to stay so strong and capable and so balanced and happy under extreme calorie deprivation. That was another surprising new skill set. As was my ability to fall so deeply in love with a place and feel so incredibly connected to and fed by it.

Nicole Apelian had appeared in both Season 2 and Season 5.

What things scared you most?

Apelian: My only true worry was the possibility of running into people. I find humans much more unpredictable than wildlife.

Thibeault: My main fear, really, was having to leave. Not because I was devoted to winning, but because I loved being there so much and didn’t want to have to leave.

Marrone: What scared me the most, was coming home too soon. If I was going to inconvenience my family by leaving to have this adventure, I had better do a good job!

What was the best thing about your return? What did you enjoy the most?

Thibeault: The perspective it has given me, the ability to never take anything, even the most basic things like enough food to live and warmth to maintain body temperature, for granted. I also appreciated the ways it helped people see me for what and who I am, which is very strong and capable. It’s a lot harder for anyone to dismiss me as a silly woman now!

Would you do it again?

Apelian: I would indeed! I love the challenge and the opportunity to spend time away in nature.

Marrone: The short answer is no. I can't leave my family in this way again. My adventure level at this point is being cuddled up on our couch, the fire lit and my pets at my side.

Thibeault: In a heartbeat. It was the most amazing, magical, beautiful and life-changing experience I have ever had.

What would it mean to you to see a woman win ‘Alone’ this season?

Marrone: To have a woman outlast and inherently become the victor would be very encouraging. It would be so great to have a female be celebrated as the best in the field and for kids to be able to see a woman as a leader amongst the men.

Apelian: It would be fantastic!

Thibeault: It would mean a lot to me. Our culture tends to be obsessed with competition and the idea of ‘winning,’ rather than the idea of doing well regardless of winning. For this reason, a woman winning feels important because it would be an important step towards a culture that recognizes and applauds the strength and capacity of women.

By submitting your information, you agree to receive emails from HISTORY and A+E Networks. You can opt out at any time. You must be 16 years or older and a resident of the United States. More details:
Follow #AloneShow